Singer-songwriter Taylor Swift is releasing the first of her re-recorded albums, “Fearless (Taylor’s Version),” on April 9. Ahead of the highly anticipated release, there has been controversy surrounding the handling of Swift’s master recordings by her former label, Big Machine Label Group, which has sold these masters to media company Ithaca Holdings instead of Swift. Particularly, “Fearless (Taylor’s Version)” can reestablish the handling of artist contracts and music ownership, reshaping the framework of the music industry. Through this great feat, Swift will finally gain control over her entire life’s work of master recordings.

Swift stated in a Tumblr post that she chose to part ways from Big Machine Records since she would be stuck in a perpetuating master recordings ownership cycle — earn back the rights for each of her six albums, one by one, by releasing more albums with the company. This offer, and the consequent selling of Swift’s master recordings to Ithaca Holdings, led Swift to speak out; her life’s work was diminished and sold without her consent. Specifically, Swift’s discography constitutes nearly 80% of Big Machine Label’s revenue.

Swift was blindsided by the deal between Big Machine Label Group CEO Scott Borchetta and Ithaca Holdings CEO Scooter Braun, stating that “none of these investors bothered to contact [her] or [her] team directly — to perform their due diligence on their investment” and never asked her how she felt about Braun acquiring “[her] art, the music [she] wrote, the videos [she] created, photos of [herself], [her] handwriting, [her] album designs.”

In order to regain control over her life’s work, Swift announced in August 2019 that she planned to re-record her past six albums once her re-recording contract clause restriction expired in November 2020. A master recording represents the final version of the recording; it is what listeners come to hear and recognize on the radio or on CDs. In Swift’s case, she owns the “musical composition” copyright for over 100 songs. However, she doesn’t own the actual sound recordings for her first six albums. Therefore, Swift’s original recordings are not able to be accessed for her personal music performances or for documentaries unless there is prior permission from her former record label.

Master recordings are valued greatly since they symbolize the pinnacle of music ownership; record labels who own the master recording have the right to release the song for commercial use, such as in films and ads. Prince famously stated in a 1996 Rolling Stone interview that “if you don’t own your masters, your master owns you.”

When signing a deal in 2005 with Big Machine Records, Swift agreed to relinquish the master recordings of her first six albums to the label, citing that Borchetta promised to keep his loyalty and that all “music has value.” However, Swift was never given the chance to buy back her master records despite numerous requests. Swift made peace when leaving the Big Machine Label Group that Borchetta would eventually sell her master recordings; although, she did not expect that Ithaca Holdings CEO Braun would purchase her master recordings. Braun, who is the manager for artists Justin Bieber, Demi Lovato and Ariana Grande, engaged in “incessant, manipulative bullying” towards Swift when her public reputation was at an all-time low in 2016.

To further ignite the unfair acquisition of Swift’s master recordings, Braun posted on his Instagram story a claim his friend made that stated, “WHEN YOUR FRIEND BUYS TAYLOR SWIFT,” insinuating objectifying and misogynistic behavior towards the singer. Swift responded to Braun’s post by saying, “[t]he fact is that private equity enabled [Braun] to think, according to his own social media post, that he could ‘buy me’ … I’m obviously not going willingly.”

In instances where record labels do not offer purchases of the master recording, re-recording the record acts as an alternative route. Specifically, American singer-songwriter JoJo had to re-record her first and second albums nearly 15 years later as a result of her former record label removing the original recordings on Spotify and Apple Music.

After Swift spoke out about Ithaca Holdings acquiring her master recordings in a deal she never was briefed on, numerous singer-songwriters supported Swift’s stance that her life works deserve to be solely owned by her. Halsey stated that Swift “deserves to own the painstaking labor of her heart” while Kelly Clarkson encouraged Swift to re-record her albums, suggesting that Swift should “put brand new art and some kind of incentive so fans will no longer buy the old version.”

Swift re-recording her 2006-2017 albums would “devalue the earning capacity of her original recordings for their new owners,” thereby strengthening her ability to regain back the power and ownership rights of her music. After Swift announced her plan to re-record her albums, Braun quietly sold the Big Machine Label Group master recordings for $300 million to private equity firm Shamrock Capital 17 months after he acquired the label as a way to deflect the eventual success of Swift’s re-recordings in the distant future. 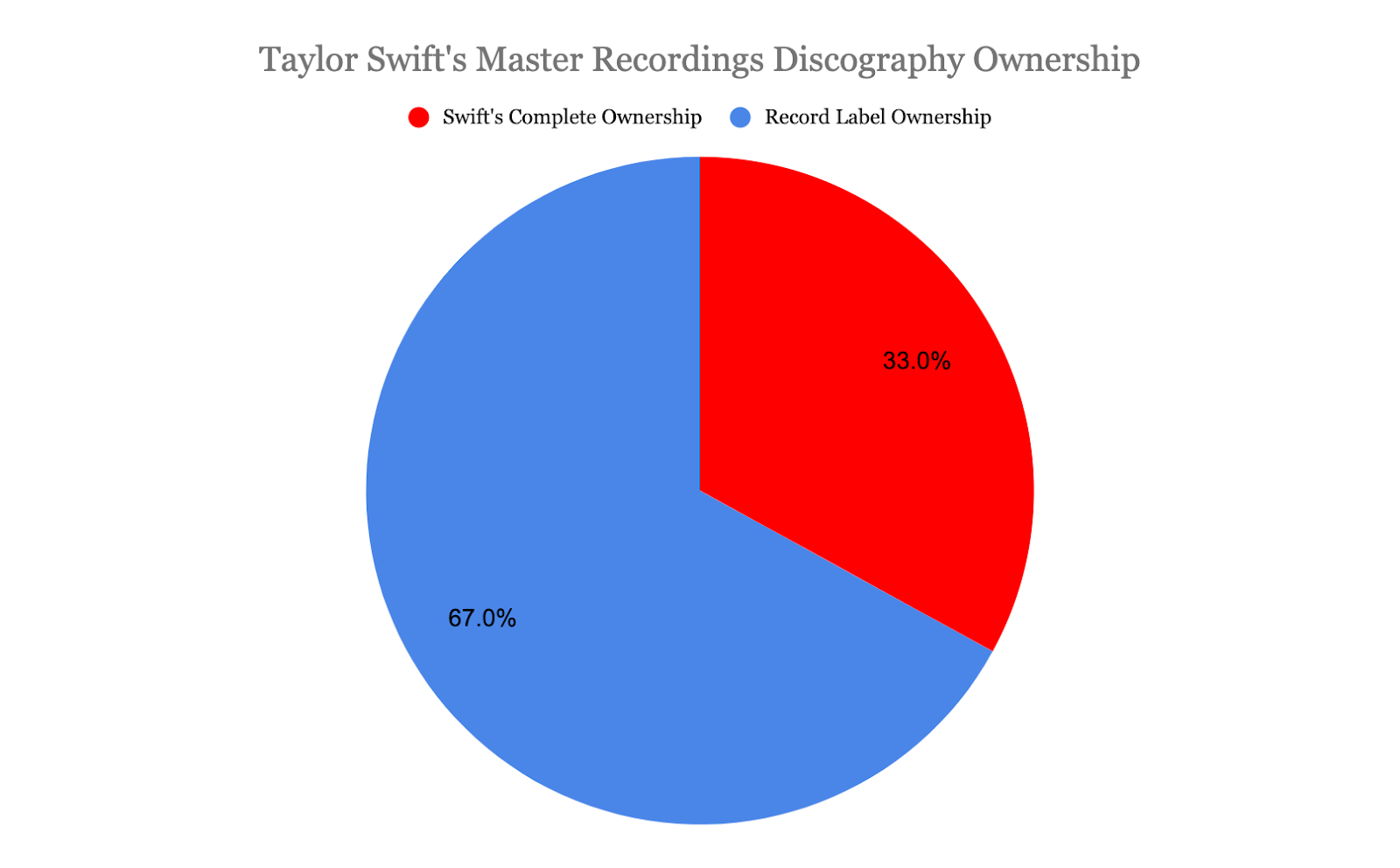 Swift’s plan to re-record her six albums will reshape how recording labels frame the master recordings ownership clause for newly signed artists. Specifically, Swift’s potential success in her re-records may cause record labels to extend the duration of when an artist is restricted from re-recording their song — from one to two years to 10 or potentially indefinitely. Swift’s re-recording marks a pivotal moment in the music industry because it reworks the traditional path of artists gaining ownership rights of their master recordings. With Swift’s status, fans are eager to invest in and appreciate her re-recordings since they represent an updated version of her life’s work; now the songs and albums hold greater value since they are owned solely by Swift.

Through re-recording, Swift is able to revisit and offer a renewed perspective with matured vocals but keep the original sound that fans have come to recognize and appreciate. Along with Swift’s re-recordings, she plans to include tracks from her “vault,” or the list of unreleased songs she wrote during the time the specific album was written. These vault songs provide a greater incentive for both fans and non-fans to purchase her re-recorded albums.

Swift’s re-recording battle with Big Machine Records transcends the superficial means of gaining profit. Rather, Swift’s fight recognizes the need for record labels to be more transparent when signing artists; they must clearly describe the ownership status of master recordings. It is an inherent right for artists to own their music, the music that they have solely written and created. Artists release their life works to share their experiences in the form of innovative song tunes and personal lyrics.

Specifically, Swift’s re-recording goal will allow her to revisit the culmination of her youth and early adulthood: “Music I wrote on my bedroom floor and videos I dreamed up and paid for from the money I earned playing in bars, then clubs, then arenas, then stadiums.” Thus, Swift’s re-recordings are much more than her earning a profit; it is for her to have complete ownership of the music she spent her entire life — every heartbreak, life experience from 15 to 28 years old and acclaimed success — working on. Swift’s re-recording situation will further perpetuate discussion around ownership of masters and how recording contracts will be issued in the future.

As Swift stated in a 2020 Variety interview, “Well, I do sleep well at night knowing that I’m right, and knowing that in 10 years it will have been a good thing that I spoke about artists’ rights to their art, and that we bring up conversations like: Should record deals maybe be for a shorter term, or how are we really helping artists if we’re not giving them the first right of refusal to purchase their work if they want to?”

Rupert Murdoch and the Growing Corporate Influence on Journalistic Freedom

Last month Trump announced his re-run for president, but his fiasco after a failed election in 2020 has left many apprehensive about the call.  The most noteworthy being Rupert Murdoch, founder of News Corporation Ltd. and owner of Fox Corp.

Ultimately, it’s up to the United States government to correct these wrongs, but considering their track record with incarceration policy, they cannot be trusted to make the changes necessary for a better, safer America.